Venelles is at the heart of Provence, between Sainte-Victoire and Luberon, 9 kilometres away from Aix-en-Provence. It was built on the last mountain pass of the Trévaresse, a range of hills extending from Lambesc to Venelles. Its location on a peak provides a breathtaking view over the Durance valley.

At an altitude of 413 metres, Venelles is the highest commune in the department after Mimet. In his book, Provence, Jean Giono quoted Stendhal: « There’s plenty of air! » in Venelles.

Originally built on a castle hill, the village spread to the plain along the Alpine route. The southern slope is used for farming and falls gently towards the Aix countryside.

The northern slope is steeper and covered in trees. To the east of the motorway is the Maurice Daugé sports park.

83% of the Venelles area is made up of natural or farm land.

« One morning in March 1892, Renaud Weibel, newly appointed as the postman for Venelles, set off for his future home in Venelles-Le-Haut;

What a wonderful view he found there!

The fields, the trees and, on the horizon, a blue-coloured bar, with a white triangle cutting it off to its right. Sainte-Victoire! he shouted!… Lower down, at the foot of the Luberon mountains, is the Durance valley and the town of Pertuis and other villages. Further to the right, near the Mirabeau bridge, at the end of the mountain range, you can see the Alps covered in snow on very clear days… » 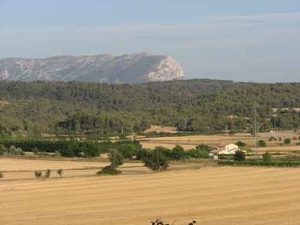