Until the mid-19th century, there was no town hall in Venelles.

A room belonging to a private landlord was rented for town council meetings and for the archives.

Mr Louis Laurin, the first mayor of Venelles in 1790 and parish priest from 1777 to 1817, donated 700 francs to the town in his will to buy a municipal building. It was purchased in 1847 and became the first town hall in Venelles.

In the 1960s, perhaps as a result of the earthquake in June 1909 or simply due to dilapidation, cracks began to appear in the walls. As a precaution, the town hall was moved to a classroom in the Marcel Pagnol school, then to a hut on site that is now used by the local police force.

The new town hall was built in 1970 in Maurice Plantier Avenue. Two extension projects were undertaken before the year 2000 to meet the needs of the growing population in the town.

… in favour of Mr Louis LAURIN, parish priest, with 62 votes to 9. The result was publicly proclaimed by the secretary in the presence of all the town’s active citizens, who asked Mr Bartélémi LATOUR, the captain of the national militia, François CABASSOL, farmer, and Jean-Louis ALBERT, farrier, to form a delegation and go to the parish house and announce his election to the aforementioned Mr LAURIN and to ask him to accept his new office. Mr LATOUR, Mr CABASSOL and Mr ALBERT therefore went to the parish house and carried out their mission and then returned to the assembly to give Mr LAURIN’S answer, which was in accordance with the assembly’s wishes. He said that he was grateful for the position that his fellow citizens had given him and that he would neglect no effort in making himself worthy of their trust… 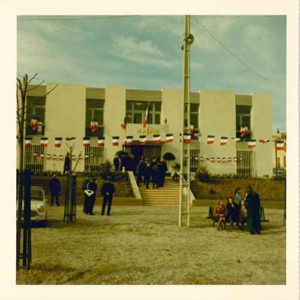 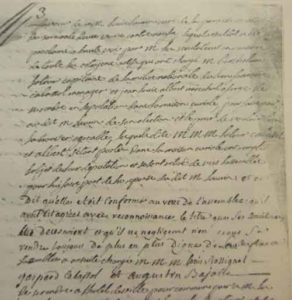