The cylindrical shape of the tower-windmill helps it to resist
the gusts from the Mistral, a prevailing wind in Provence. The base was made from local stone and is crowned with a rotating calotte and a roof with wooden cladding. Here the 7-metre-long sails were fixed. They were destroyed during the earthquake in June 1909.

The windmill entrance is set on the opposite side to the prevailing winds to limit energy loss.

Venelles made its own flour

The windmill was built on high land, providing a breathtaking view over Sainte-Victoire to the south-east and over the Aix countryside to the south-west, where wheat was grown.

The tower-windmill was built in 1662 and was in service until 1904. Local inhabitants brought their own cereals, which the miller made into flour. Bread was then baked in the town oven next to the church.

After lying empty for years, the windmill was almost in ruins.

From 1968, new owners gave ten years of their lives to rebuild the walls and make the edifice a home. It original design is intact and the rooms inside were adapted to its unusual shape.

Even without its sails, the outline of the windmill stands as a landmark in the old village and is part of the visual identity of Venelles. 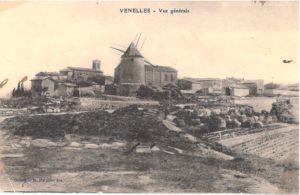 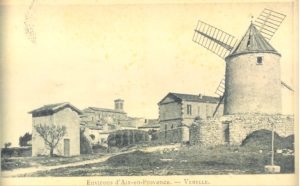